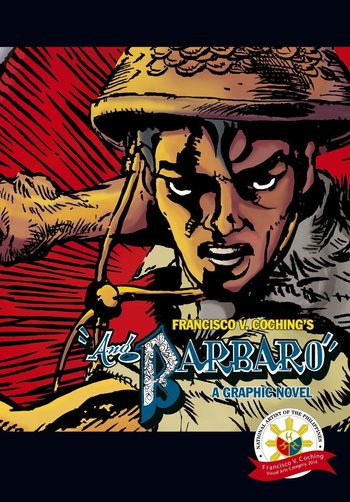 Ang Barbaro (literally, "The Barbarian" in English), is a Tagalog-language graphic novel by legendary Filipino komiks artist, and National Artist for Visual Arts, Francisco V. Coching. It was originally serialised in local komiks magazine Pilipino Komiks from the late 1940s to early 1950s, and adapted to film by the studio Sampaguita Pictures in 1952. In 2016, on the heels of Coching's posthumous awarding as National Artist, the entire run was eventually published in a single bound volume.

Sometimes also called "Sabas, ang Barbaro", as Sabas is the eponymous Barbaro's actual name. The graphic novel establishes him as a dutiful, honest, and hardworking peasant youth living with his father and mute sister in a typical rural Luzon town in the mid-19th century, in the late-Spanish-colonial Philippines. Sabas shows promise as a young student, and to that end the kindly Spanish friar of his town pays for his Manila studies out-of-pocket; but while there, the brutal realities of Spanish colonialism hit hard: his father is killed, his sister is raped and dies by suicide soon afterward, and the greedy and cruel local chief refuses to allow them a proper burial, and certainly not on his land. When Sabas finds this out and returns home, he is arrested and tortured by colonial cops for attempting to come to their defence, and his friar patron is too weak to do much about it either, appealing to colonial authorities in vain.

With his entire support structure dead in short order, Sabas escapes incarceration, frees the colonial state's other prisoners, takes up his father's hat and arms himself with a sharp blade. Henceforth, he is Barbaro, defender of the land's poor and oppressed, and feared, sworn enemy of abusive colonisers.