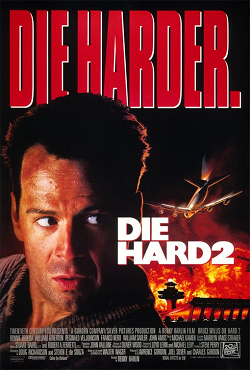 "Oh man, I can't fucking believe this. Another basement, another elevator. How can the same shit happen to the same guy twice?"

The second film in the popular Die Hard film franchise.

Bruce Willis returns as New York City police officer John McClane, who is at Washington's Dulles International Airport waiting for his wife Holly to arrive for Christmas with her parents. Unknown to McClane, the government has extradited wanted dictator Ramón Esperanza (Franco Nero) from Val Verde to the United States to stand trial for allegations of drug trafficking at around the same time. A group of rogue ex-US army soldiers loyal to Esperanza, led by the rogue Colonel William Stuart (William Sadler), attempt to rescue the corrupt ex-general by taking over Dulles's control systems and holding all of the planes hostage in the air. McClane figures out what's going on, which leads him to work against the airport's on-site law enforcement to stop Colonel Stuart before any of the planes — especially Holly's — run out of fuel and crash.

Why does this keep happening to us?