Film / The Adventures of Ford Fairlane 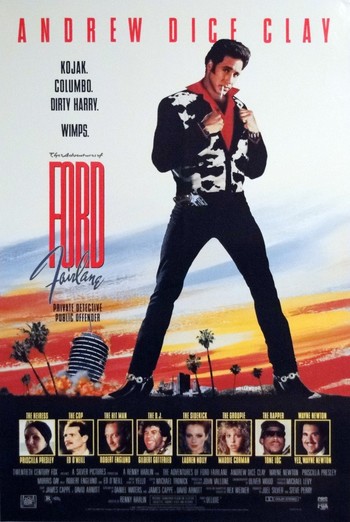 The Adventures of Ford Fairlane is a 1990 film and star vehicle for 80's comedian Andrew "Dice" Clay, who plays the eponymous Ford Fairlane. It's also notable for being an early work of Finnish director Renny Harlin and being featured in the music video for Billy Idol's "Cradle of Love."

Ford Fairlane (Clay) is a private investigator who specializes in the Hollywood music industry. His business, run by himself and his assistant, Jazz (Lauren Holly), is experiencing financial difficulties because most of his clients keep paying him with expensive gifts instead of money. Eventually, he's hired by two seemingly unrelated clients, shock-jock DJ Johnny Crunch (Gilbert Gottfried) and humorless socialite Colleen Sutton (Priscilla Presley), to find a young groupie named Zuzu Petals. Although he has reservations, they offer him cash. His investigations lead him through a cast of colorful characters, including sleazy record producer Julian Grendel (Wayne Newton), a giggling mercenary known only as "Smiley" (Robert Englund), the bumbling, nostalgic cop Lieutenant Amos (Ed O'Neill), and eventually to Zuzu Petals herself (Maddie Corman), a space cadet.