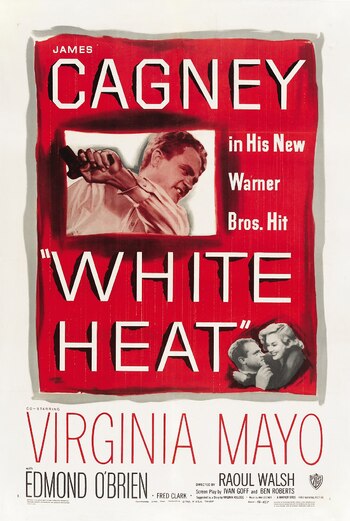 "Made it, Ma! Top of the world!"
— Cody Jarrett
Advertisement:

White Heat is a classic 1949 Warner Bros. Film Noir, directed by Raoul Walsh and starring James Cagney in one of his most acclaimed performances.

Cagney is Cody Jarrett, the violent and emotionally unstable gang leader who still has a soft spot for his Ma (Margaret Wycherly). After pulling off a train heist, he gets arrested and convicted for a robbery he didn't commit (as part of an alibi he'd previously arranged). Waiting in prison until the heat is off, he's worried about Big Ed (Steve Cochran), his second-in-command, taking control of his gang and his unfaithful wife Verna (Virginia Mayo). When he hears Ed has killed his mom, an enraged Cody busts out, determined to rub out Ed and regain control of the gang.

What he doesn't know, though, is that a trusted fellow con (Edmond O'Brien) who escaped with him is really an undercover cop. It all comes to a spectacular finish during another heist, where Cody makes it to the top of the world...