Western Animation / All Out for 'V' 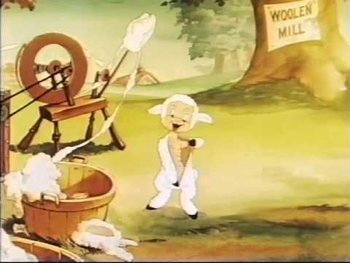 All Out for 'V' is a 1942 animated short film (7 minutes) directed by Mannie Davis. It was produced by Paul Terry for his Terrytoons studio.

The idyllic peace of a sylvan forest is interrupted by bombs falling out of nowhere. A raccoon dashes by with a newspaper extra announcing that war has been declared. Instantly the animals of the forest snap into action, mobilizing for the war effort. Chickens lay eggs, termites slice tree trunks into wooden boards, woodpeckers pound nails, turtles use their shells to squash metal plates into helmets—all to help defeat the enemy.

The "V" in the title stands for "Victory". It was a common symbol during World War II.