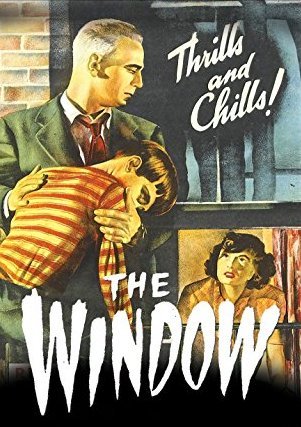 The Window is a 1949 American black-and-white suspense Film Noir directed by Ted Tetzlaff, based on the short story "The Boy Cried Murder" by Cornell Woolrich.

On a hot summer night, young Tommy Woodry (Bobby Driscoll) decides to sleep on the fire escape of his family's tenement apartment. He climbs up outside the window of a neighboring couple, the Kellersons (Paul Stewart and Ruth Roman), where he sees them kill a man with a pair of scissors. The problem is that Tommy has a reputation for telling tall tales, so of course his parents (Arthur Kennedy and Barbara Hale) refuse to believe him now that he's telling the truth. He even sneaks out of the house and goes down to the police station to report the crime, but they don't take him seriously. Tommy is afraid that if the Kellersons find out what he saw, he will be their next victim. And the Kellersons do find out — when Tommy's mother makes him apologize for "lying" about them — and they have every intention to kill him.