Film / After Dark, My Sweet 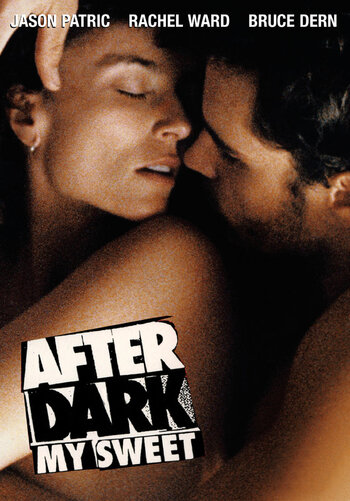 After Dark, My Sweet is a 1990 film directed by James Foley.

Jason Patric stars as Kevin "Collie" Collins, a former professional boxer. As the film opens he has escaped from a mental institution, where he was put after he killed a man in the ring. His meek demeanor and nonstop chatter mark him off as mentally disturbed, but tend to give false impressions: people believe that he is dumb when he is actually quite intelligent, and people believe that he can be pushed around when he is actually capable of terrifying violence.

Kevin, drifting aimlessly after escaping from the mental hospital, winds up in a dusty desert town in the general vicinity of Palm Springs, CA. He attracts the attention of Fay Anderson (Rachel Ward), a young widow who lives alone and drinks to excess. Fay ostensibly hires Kevin to tidy up her dilapidated estate and look after her date tree orchard, but she is clearly sexually attracted to him.

Or she may have another motive. Soon after Kevin takes up residence in the trailer on Fay's property, he is approached by one "Uncle Bud" (Bruce Dern), an ex-cop and acquaintance of Fay's who is clearly not her uncle. Uncle Bud has turned to a life of crime, and soon enlists Kevin in his scheme: the kidnapping of a sickly child from a local rich family.

Based on the novel of the same name by legendary pulp fiction writer Jim Thompson.