Film / The Affair of the Necklace 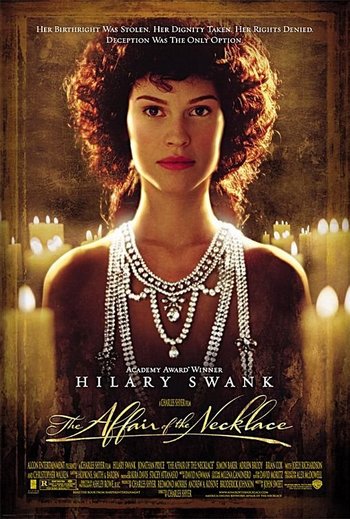 The Affair of the Necklace is a 2001 film set in 18th Century France and based on historical events, directed by Charles Shyer and starring Hilary Swank, Jonathan Pryce, Christopher Walken, Simon Baker, Adrien Brody, Joely Richardson, and Brian Cox.

Jeanne de Saint-Rémy de Valois (Hayden Panettiere as a child, Swank as an adult) is orphaned as a young girl and determined to restore the wealth and privilege that was lost to her family; Marie Antoinette (Richardson) refuses to help her, so she - along with Rétaux de Villette (Baker) and her husband Nicolas (Brody) - set out to get it via other means. The necklace of the title was intended by King Louis XV for his mistress Madame du Barry, but he passed away before she could have it; the jewellers later tried to sell it to Marie Antoinette, but she refused. Jeanne's plan involves subterfuge to acquire the necklace and its jewels for herself and her conspirators, with unfortunate consequences—French Revolution-level unfortunate—for all concerned...