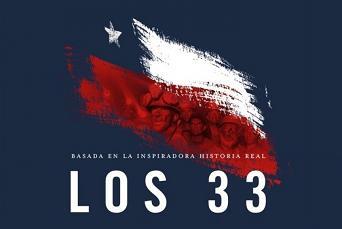 "Estamos bien los 33"
The 33 is a Chilean-American film about the 2010 Copiapó mining accident and the 33 miners who were trapped underground for three months. It stars Antonio Banderas, Rodrigo Santoro, Juliette Binoche, James Brolin, Gabriel Byrne, and Lou Diamond Phillips.
Advertisement:

33 people from the small city of Copiapó, Chile, work as miners at San José. The owners ignored the reports about structural problems in the mine, and ordered to keep working in it anyway. The mine finally collapsed, and the miners managed to reach a rescue chamber. The emergency ladders were missing, the radio was just a lot of useless cables, the medical kit was empty, and there was very little food available.

In light of the owner's disastrous management of the problem, the government of Chile seized the mine and directed the rescue operations. After some failed attempts, a drill managed to open its way to the refuge. First they sent the provisions that they may require, and finally opened a tunnel wide enough to retrieve all the miners back to the surface.

The 33 contains examples of: