Film / The Adventures of Rocky & Bullwinkle 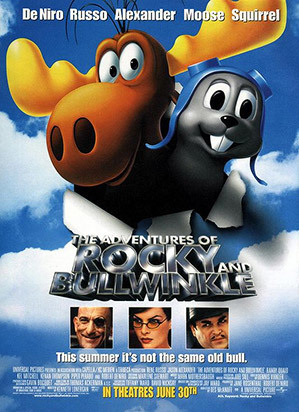 The Live-Action Adaptation of the animated series, The Adventures of Rocky & Bullwinkle from 2000 is a mix of animation and live-action starring the famous moose and squirrel and their enemies, Fearless Leader, Boris Badenov and Natasha Fatale.

In this film, Rocky and Bullwinkle's home of Frostbite Falls has fallen into ruin from years of their show's reruns, while the three villains find a way into the real world and plot to take over America with a cable TV station that brainwashes the viewers. To save the country, FBI agent Karen Sympathy brings the moose and squirrel to the real world and journey across the country to stop the fiends and save the people of America.

Not to be confused with the 2018 Amazon animated series, or Boris and Natasha, with Dave Thomas and Sally Kellerman in the title roles.

The Adventures of Rocky & Bullwinkle provides examples of: