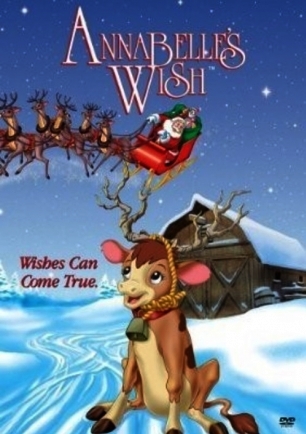 Wish I may. Wish I might. On my favorite star.
Let me feel, let me see the world from where you are.
Someday soon, Mr. moon I will touch your face.
I'll flutter by, lady butterfly.
Challenge eagles to a chase.
Round and round, and up and down.
No boundaries no fears.
My heart was born to dream
to see the world from way up here.
— The film's theme song "The World From Way Up Here"

Annabelle's Wish is a 1997 direct-to-video animated Christmas film. Set in rural Tennessee, the story is mainly about Billy, a little boy whose parents died in a fire and now lives with his maternal grandfather, Charles, on his farm. Billy is a mute, brought on from being traumatized after being caught in the same fire in his grandfather's barn that killed his parents. On Christmas Eve, a calf named Annabelle is born. Soon after, she meets Santa Claus, who gives her and the other farm animals the ability to speak once a year on that day. Annabelle becomes fascinated with Santa's reindeer and dreams of learning to fly and pulling his sleigh. On Christmas morning, Annabelle befriends Billy, and the two become inseparable. But trouble comes in in the form of Billy's Aunt Agnes (the sister of Billy's late father), who is constantly scheming to gain custody of him by any means necessary. When all hope seems lost, it is up to Annabelle to show what it means to sacrifice for someone you love, and that a kind act can go a long way, sometimes even returning when you least expect it...

This special premiered on Fox in 1997, and was a holiday staple for Cartoon Network for many years. It got a float in the Macy's Thanksgiving Day Parade during its premiere year, and also helped to promote the Make-A-Wish Foundation, as seen on the original VHS release.

Not to be confused with A Simple Wish, which was released around the same time and also features a principal character named Annabelle (but a different spelling thereof).