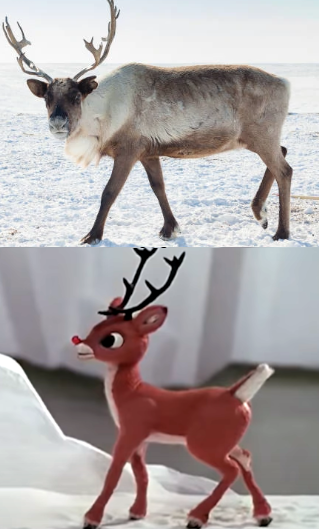 Reindeer (Rangifer tarandus; also known as caribou, which is usually used in North America to refer to wild individuals) are one of the most well-known herd animals in northern regions. The most iconic reindeer are the eight (nine, if you include Rudolph) magical flying ones used to pull Santa Claus's sleigh in Christmas media.

Due to being adapted for cold climates, real reindeer have a very distinctive appearance, being very muscular and bulky for conserving heat (which is also what makes them excellent at pulling sleds), along with having thick fur coats and large nasal cavities to warm the air they breathe. Their antlers are distinctively-shaped, with multiple modest scoop-like "palms" on each, rather than the simpler spiky tines of most deer species, or the large single palms of moose and fallow deer. They are also the only deer species in which both sexes have antlers, with females keeping theirs year round and males shedding theirs in the winter.note Though male reindeer will keep their antlers when neutered.

However, in drawn media such as animation, books, and artwork, Santa's reindeer are usually designed to resemble more generic deer, such as the species North Americans tend to be most familiar with- the white-tailed deer (Odocoileus virginianus). They will have gracile bodies, slender muzzles with black noses, tined antlers, relatively thin fur, and females will often lack antlers entirely, while males keep theirs regardless of the time of year.

This trope is so widespread through Christmas merchandise that many audiences think reindeer aren't real animals, or that caribou and reindeer are two different species.

A Sub-Trope of Artistic License – Biology, Somewhere, a Mammalogist Is Crying, Informed Species and Funny Animal Anatomy. Can be considered the cervine equivalent to Zebras Are Just Striped Horses and Penguins Are Ducks.