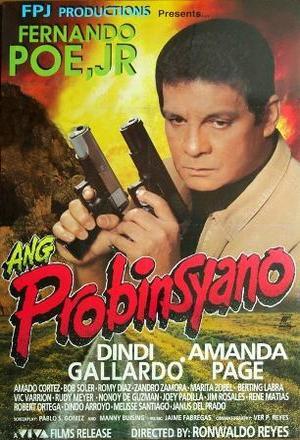 Ang Probinsyano (lit. The Man from the Province) is a 1997 Philippine action film by Fernando Poe, Jr. who plays a double role as his twin brother. The film became a box office hit, spawning a sequel entitled Ang Pagbabalik ng Probinsyano with Poe reprising his role.

It follows the story of Kardo, a cop from the province, assuming the identity of his twin brother Ador, who was killed in a drug bust operation after he was betrayed by a fellow officer. His superior devises a plan for his twin brother to capture the drug syndicate and the corrupt policemen responsible for his death.

Now has a series reboot starring Coco Martin that began airing in 2015.