Literature / All the Pretty Horses 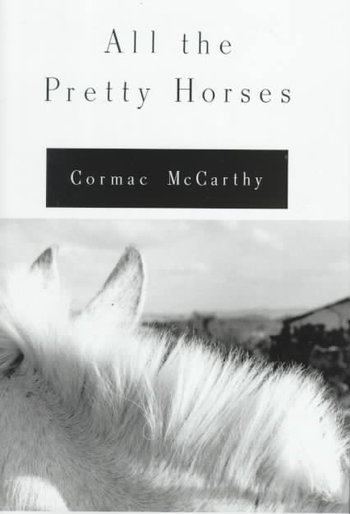 All the Pretty Horses is a 1992 novel by Cormac McCarthy.

The novel tells the story of John Grady Cole, who grew up on his grandfather's ranch in San Angelo, Texas. In 1949, when Cole is 16 years old, his grandfather dies and Cole learns the ranch is to be sold. With no home and faced with the prospect of moving into town, Cole asks his best friend Lacey Rawlins to join him to travel to Mexico, to seek work as cowboys. After an encounter with a peculiar 13-year-old boy named Jimmy Blevins during their trail, they find employment at a large ranch, where Cole falls in love with the owner’s daughter, Alejandra Villarreal. But Cole's romantic interest in Alejandra is not welcomed by her wealthy aunt, and that’s not the last of his troubles.

The book was adapted as a 2000 film, starring Matt Damon and Penélope Cruz, and directed by Billy Bob Thornton.

Alternative Title(s): All The Pretty Horses