Film / The Agony and the Ecstasy 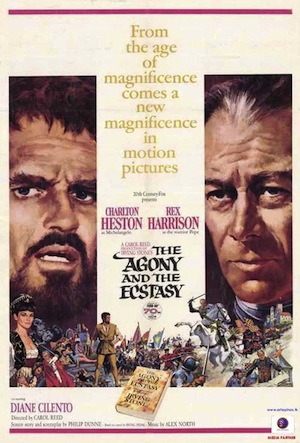 The Agony and the Ecstasy is a 1965 Costume Drama directed by Carol Reed. It tells the story of the creation of the ceiling fresco paintings for the Vatican's Sistine Chapel in Rome. The film is also the story of the trails and tribulations of the artist Michelangelo Buonarroti (Charlton Heston) and his patron, Pope Julius II (Rex Harrison), as they spar over money, Michelangelo's art, inspiration and a bit of the politics of the time.