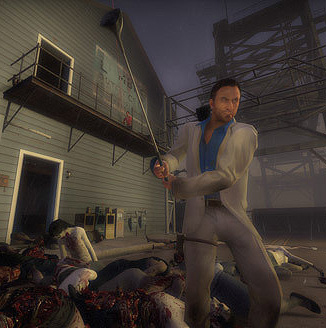 Bonus points if the wielder first shouts, "FORE!"
"Okay, you guys, it's dangerous, so we need to be prepared. So I brought a golf club!"
— Yosuke, Hiimdaisy: Persona 4
Advertisement:

When you think of sports equipment-as-Improvised Weapon, you probably think of a baseball bat. But thugs who want to be a bit different, perhaps show a bit more class, reach instead for their 9-iron. Where the former is essentially a big stick, your golf club is more like a hammer, with all the weight concentrated on the point of impact.

The Weapon of Choice of the Corrupt Corporate Executive, because they're likely to have one lying around anyway. They might even have several, in which case you can expect them to consult their Number Two on the best club for the shot. Alternately, the Number Two might make a recommendation of their own volition part way through the assault.

It is also obviously the Weapon of Choice of someone whom plays golf either recreationally or as a professional Golfer.

This trope displays varying degrees of realism. While pretty much anything you hit with a golf club is going to feel it, golf shafts are lightweight and liable to break if you hit something too heavy with too much force, or hit something with the shaft, having the club head swing beyond the point of impact. While a broken metal shaft would leave an end sharp enough to serve as a stabbing implement, the fragility of golf clubs compared to baseball bats or solid metal poles make them a poor choice for zombie defense or the like.

Has nothing to do with Not My Driver.