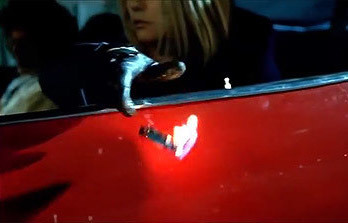 You do know that a Zippo costs about twenty bucks, right?
Advertisement:

But this trope doesn't just need a light, it needs a light that stays lit when you toss it. Disposable lighters do not stay lit by design, as a safety measure. A cigarette, cigar, or flare just doesn't fit the scene (and the former two don't actually burn hot enough to ignite gasoline). A match might go out before it lights the fire. So what do you do? Zippo to the rescue! Zippo lighters have a distinctive design that was originally based on a similar Austrian lighter made by IMCO. It is "windproof" (as described

by The Other Wiki) and uses a wick and oil to keep the flame lit until you close the top. They have been in use for decades, but this trope seems to be relatively new.

The main reason for this trope is about the mechanics of the device and how it can keep a flame while being tossed from the hand. While the character lighting the fire could use a disposable lighter, they would have to bend down to light the flammable item on fire, and that is just not cool. Often this trope is used for dramatic effect as well. While the character flicks open the lighter and snaps the flame into existence, he or she can do a bit of monologuing (and possibly light a smoke for themselves or their victim into the bargain). At the end of the scene, they toss the lighter, the flames begin, and often this leads to someone's death by fire, or a very big explosion. Equally often a character will do an Unflinching Walk as the flames rage behind them.

The main elements of this trope are:

This can often be a Death Trope as it can result in a person being lit on fire. Usually a subtrope of Rule of Cool.

Compare with Cigar-Fuse Lighting. May be combined with Hard-to-Light Fire, if the combustible material won't catch immediately or an alternative ignition-source fails to work first.

Vapor Trail sometimes leads into this.

Can often end with Man on Fire or Stuff Blowing Up

Please no Real Life examples. And Don't Try This at Home.

Note: As a potential Death Trope there may be spoilers ahead!