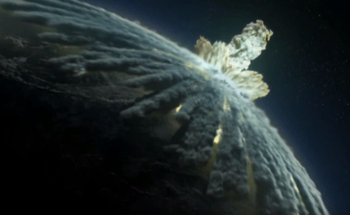 The chemical bomb that created this blast was small enough to be transportable by semitruck.
"If God is Dead, he was probably screwing with Arconite"
— Breach grenade description, Heat Signature
Advertisement:

Just one problem; the explosion you're now displaying is far too big to be caused by the explosive you say is causing it — or, in the case of fictional explosives, too big for any known real-world explosive of equivalent size and type; it's literally providing too much bang for its buck. To create the explosion from that small a package would require a Ridiculously Potent Explosive.

Some authors realize this and create their explosives out of Unobtainium, Magic, or their local Green Rocks or Minovsky Particle in an attempt to justify the explosive power, but even that is not a guarantee that you won't end up with creating an unjustified Ridiculously Potent Explosive if, for instance, your explosion is chemical yet rivals nuclear, or antimatter, devices in potency. * To put this in perspective, cubic gauche nitrogen, a solid form of nitrogen similar to diamond, has the highest predicted chemical binding energy density of any known substance. It would still take around twelve thousand tonnes of the stuff to match the yield of a tactical nuclear weapon weighing less than one tonne.

Subtrope of Artistic License – Explosives, often a case of Sci-Fi Writers Have No Sense of Scale in terms of energy, or it might occur because Writers Cannot Do Math. May be used to create Earth Shattering Kabooms. Compare Made of Explodium, for things which really shouldn't be exploding in the first place. Compare and contrast the Slap-on-the-Wrist Nuke for when the explosion underperforms for what is producing it, and the Big, Bulky Bomb, another similar (but reversed) misconception where a huge-looking bomb may have a bigger yield compared to a smaller one (disregarding the bomb's active elements). Examples might be subjected to Science Marches On should we manage to create more potent explosives of the same category in the future. Compare with Everything Makes a Mushroom, where the mushroom cloud itself is usually Played for Laughs.

No Real Life Examples, Please! This trope is about those explosives whose explosive portrayal would be impossible to replicate with real world equivalents, not merely really powerful explosives. * Even nuclear and antimatter-matter annihilation, while very explosively potent, are still not any more potent than nuclear and antimatter-matter annihilation, respectively.
When a real-life explosive emerges that breaks the laws of physics, then it can be added.. and may God help us.