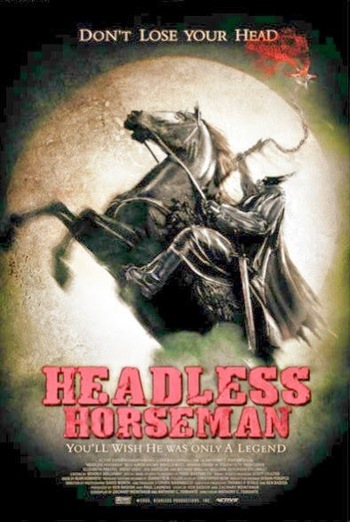 Headless Horseman is a film that aired on the Sci Fi Channel in October 27, 2007, based on the legend of the Headless Horseman. The movie takes the tack that the Washington Irving story was the "white-washed" version and the events in this horror film is the real story. It stars Richard Moll and Billy Aaron Brown and is directed by Anthony C. Ferrante.

After going through the woods on the way to a party, seven teenagers stumble upon a town called Wormwood Ridge. The townspeople are celebrating a Headless Horseman ceremony, which unbeknownst to the teenagers requires human heads from young people. The teens, with the help of a young tow-truck driver named Candy (who is initially on the town's side, but later feels guilty and decides to help the teens), attempt to escape the town before they are killed.

Tropes used in Headless Horseman include: