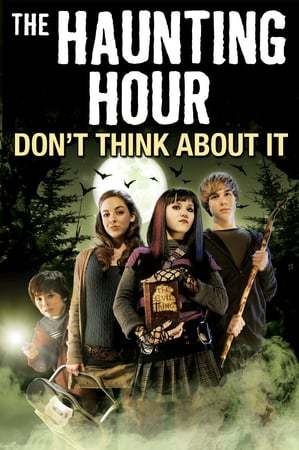 R. L. Stine's The Haunting Hour: Don't Think About It is a 2007 live-action direct-to-video children's horror movie and it's routinely shown on Cartoon Network during the month of October.

Cassie is a thirteen-year-old Goth who just moved to a new neighborhood. She finds a mysterious Halloween store down an alley, and buys a book called The Evil Thing, which contains a warning on the front page: "DO NOT READ ALOUD!"

After doing just that, The Evil Thing is brought to life, and it captures Cassie's brother Max, the Alpha Bitch Priscilla, and a Papa John's delivery guy. It is then up to Cassie and Sean to stop The Evil Thing.

Later on, R.L.Stine created a TV series of the same name that isn't related to this movie.

Alternative Title(s): The Haunting Hour Dont Think About It