Film / A Haunting at Silver Falls 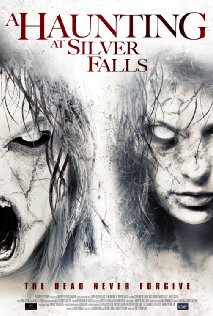 A Haunting at Silver Falls is a horror movie directed by Brett Donowho in the year 2013.

Jordan (Alix Elizabeth Glitter) has recently lost her father to Leukemia, and so is forced to live with her Aunt Anne (Tara Westwood) and Uncle Kevin (Steve Bacic) in the supposedly haunted town of Silver Falls. Her boyfriend, Larry (James Calvo) decides to take her out that night to the burning mannequin, and tells her about the ghosts. That same night, she finds a ring and puts it on without even realizing it... And from that moment on, she finds herself being haunted by the ghosts of the Dahl twins (Jade and Nikita Ramsey), who were supposedly murdered by their father 20 years ago. Jordan must figure out what the ghosts want to end her haunting.

In June 2019, a sequel was released called A Haunting At Silver Falls: The Return. Jordan and Larry star once again, as the ghosts return and more murders keep happening in Silver Falls.

This Film and The Sequel Feature Examples Of: