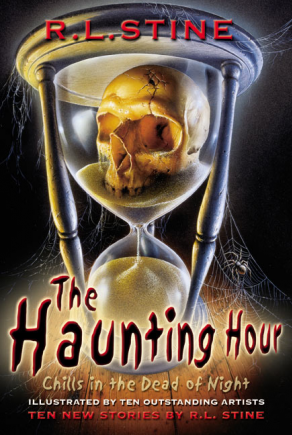 "Some stories are too terrifying to tell," says R.L. Stine. "They are the ones that live in the darkest corners of my mind. The ones that give me chills in the dead of night. The ones that I must tell you now-or they will haunt me forever!"
— Back blurb of the book

The Haunting Hour (having no real relation to the show of the same name, aside from some stories that were adapted as episodes), is a 2001 followup collection to the previous Nightmare Hour by R. L. Stine. In the same vein, The Haunting Hour is a collection of nine standalone tales, as well as a sequel to the previous book's story, "The Most Evil Sorcerer". Among the stories within include a ghoulish Halloween dance, a haunted set of paintbrushes, and the truth behind one's imaginary friend.

The Haunting Hour provides examples of: