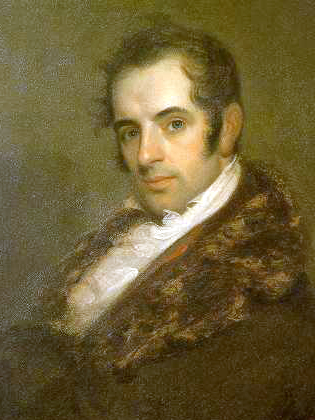 Washington Irving (April 3, 1783 – November 28, 1859) was an American writer of the early 19th century. He is best known for the short stories "Rip Van Winkle" and "The Legend of Sleepy Hollow", and is popularly considered the first person to make a living primarily as a writer, when the authors before his time tended to just do it as a side job.
Advertisement:

Irving had his first notable success with A History of New York, an 1809 satirical work that he wrote under the Pen Name of Diedrich Knickerbocker, a fictional Dutch-American historian. That persona was also used for The Sketch Book of Geoffrey Crayon, Gent., which purports to be a collection of tales that Geoffrey Crayon (another pseudonym) compiled from the notes of Diedrich Knickerbocker. "Rip Van Winkle" and "The Legend of Sleepy Hollow" were both originally published as part of the Sketch Book collection.

However, Irving's influence extends beyond those two famous stories. He was the one who coined the nickname "Gotham" for New York City. The aforementioned History of New York set the ball rolling for our modern conception of Santa Claus, which would later be codified in "'Twas the Night Before Christmas" by Clement Clarke Moore. And perhaps more infamously, Irving's 1828 historical novel A History of the Life and Voyages of Christopher Columbus is generally blamed for inventing the myth that Christopher Columbus sailed west to prove the Earth was round.

Irving's last work was a five-volume biography of his namesake, George Washington, which he intended to be his Magnum Opus. As you may have noticed, it didn't happen that way. Irving is buried in the Sleepy Hollow Cemetery, the very cemetery supposedly haunted by his Headless Horseman character.