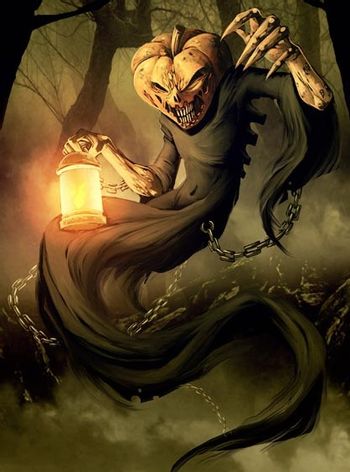 Then since Jack is unfit for Heaven
And Hell won't give him room
His ghost is forced to walk the Earth
Until the Day of Doom
A lantern in his hand he bears
The way by night to show
And, from its flame, he's got the name
Of Jack O' Lantern now
— "The Romance of Jack O' Lantern", by Hercules Ellis
Advertisement:

Stingy Jack is a character of Irish folklore, who is said to have tricked the devil into an inescapable situation, be it he was tricked into his pocket where a rosary was, or he climbed a tree with a cross on it—anything cross-y, really. Jack then made a simple deal with him: If Jack lets him go, the Devil must make sure that he does not enter Hell. Unfortunately for Jack, his party-filled lifestyle did him in, and when he entered the afterlife, he couldn't get into Heaven. Having nowhere else to turn to, he bit the bullet and made his trek to Hell. But oh no, the Devil was still sore over that silly joke he played! With Jack having nowhere else to go but into the infinite darkness, the Devil did him a solid and gave him a candle (a coal from Hell, in some versions) to light his way, which he keeps to this day inside a small hollowed-out turnip as a kind of lantern.

Over time, the idea of Stingy Jack would be revered as a cautionary tale to those who play tricks and are not exactly Christian enough for everyone's liking, even equating Jack to certain phenomena like Will-o'-the-Wisp.

With ye auld traditions migrating to America, some sacrifices were made and the traditions changed with the times, as the turnip was soon traded for the pumpkin (due to being larger and thus easier to carve); the rest, as they say, is history. To this day, the Jack-o'-Lantern (for "Jack o' the Lantern", another name for Stingy Jack) is a popular Halloween icon, and the idea of Stingy Jack has transcended into media in many incarnations.

Such adaptations usually portray him as possessing a Jack-o'-Lantern for a head, while some simply portray him as possessing a pumpkin somewhere on his person. Because of the secularization of the holiday, how Stingy Jack is perceived differs as well, from being portrayed as a jovial soul simply searching for peace to a Scary Scarecrow out to cause trouble and anarchy on old Samhain — like some sort of freakish Halloween Krampus. In more volatile settings, it's common to give him fire-based magic. Compare the Spirit of Halloween, who is usually more benevolent.

Jack Skellington the Pumpkin King from The Nightmare Before Christmas has some clear parallels with Stingy Jack, including his name, his undead skeletal appearance, his ceremonial pumpkin-headed scarecrow costume, and his status as the charismatic figurehead of Halloween Town. He's a far more heroic figure, though.

Jack Skellington the Pumpkin King from The Nightmare Before Christmas has some clear parallels with Stingy Jack, including his name, his undead skeletal appearance, his ceremonial pumpkin-headed scarecrow costume, and his status as the charismatic figurehead of Halloween Town. He's a far more heroic figure, though.