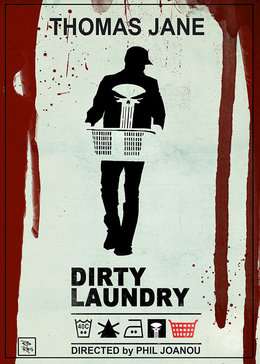 Crime is the dirt. Meet the detergent.
Dirty Laundry is a 2012 Short Film/Fan Film released during the San Francisco Comic-Con starring Thomas Jane as a solitary man living out of the back of an old van currently parked in a rough neighbourhood. While doing his laundry, he crosses paths with a local gangster and his crew, who have a score to settle with a local prostitute and a local boy who refuses to sell drugs for them. Unfortunately for them, although he is never named or explicitly identified in the story, the man is apparently Frank Castle — otherwise known as The Punisher.
Advertisement:

Jane, who played the title role of The Punisher in the 2004 movie of the same name, referred to the film as a "love letter" to the character and he financed it himself. Directed by Phil Joanou (Gridiron Gang), it also has a cameo by Ron Perlman.