Film / Death of a Shadow 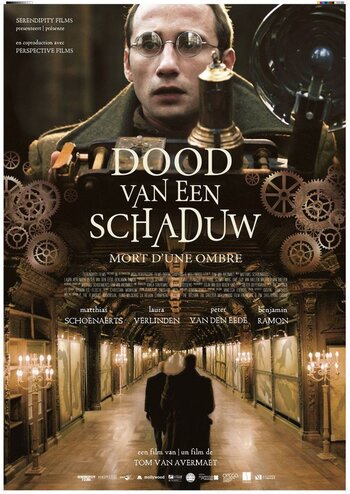 Death of a Shadow (Dood van een Schaduw) is a 2012 short film from Belgium (in Flemish), directed by Tom Van Avermaet.

Nathan Rijckx (Matthias Schoenaerts) is a young Belgian man wearing an army greatcoat. As the film opens he hears a sound of scuffling and a struggle in the street...but there are only disembodied shadows. Nathan points a weird, ornate camera at the sounds, and the camera reveals what is really happening: a man is beating another man to death. Nathan takes a photo at the moment the victim dies.

He then goes to a strange house full of ornate steam-powered equipment, where he is met by a strange bald man. It seems that Nathan is a Belgian soldier who was killed in combat in 1917. He now lives in a sort of afterlife, where he travels through time (the beating he photographed was in 1983) harvesting shadows of the dead for the bald man, who collects them. Long ago, the bald man offered Nathan a deal: if Nathan brought him ten thousand shadows of the dead, the bald man would allow Nathan to return to the world of the living. Nathan has only two souls left to collect. He hopes to go back to 1917 and find Sarah, a young woman whom he met just moments before he was killed.