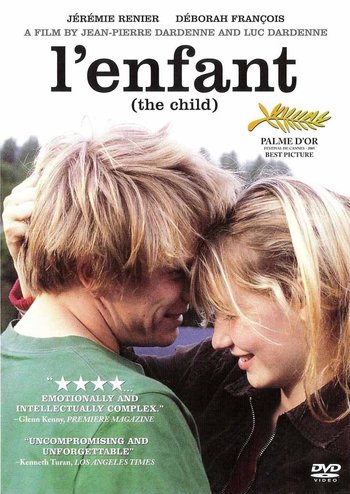 L'Enfant (The Child) is a 2005 film from Belgium, in French, directed by the brothers Jean-Pierre Dardenne and Luc Dardenne.

The protagonist is Bruno (Jérémie Renier), a pimply-faced and very dumb young man who lives on the fringes of society, scraping by via panhandling and petty theft. Sometimes he's so down and out that he lives under a bridge. As the film starts his girlfriend Sonia comes home from the hospital, where she has just delivered their baby son, Jimmy. She can't get into her cramped apartment because, in her absence, Bruno has sublet it for a few days, but after she finds him she forgives him.

Bruno ekes out a precarious existence by pawning/fencing stolen goods. A fence who knows about Jimmy makes a helpful suggestion: sell the baby! So, while he has little Jimmy with him, and without telling Sonia, Bruno sells him to some gangsters who do black market adoptions. When he returns to Sonia he tells her that he sold the baby, shows her the fat wad of euros that he got, and suggests that they can always have another.

Sonia takes this about as well as one might expect: she faints. In fact, she has an attack that requires hospitalization. Bruno, who finally twigs to the idea that selling his infant son was not a good idea, asks for his baby back from the gangsters. Surprisingly, they do in fact return Jimmy—but there's a catch. The gangsters were expecting to profit €5000, and since they didn't get the money from the baby, they want it from Bruno. In the meantime, an enraged Sonia has reported Bruno to the police.