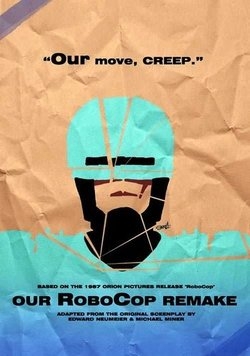 Our RoboCop Remake is a parody/Fan Remake of the original RoboCop (1987), produced by David Seger and released in February 2014 — right around the time that the official remake of the film actually hit theaters.

The film (which was made possible through online crowdfunding) features alternate takes of 50 scenes that make up the original source material by 50 different creators. Ranging from animated sequences to a scene featuring Muppets to an interpretive dance number to several over-the-top hyper-violent action scenes to comedy sketches to a side trip into the Acid-Trip Dimension, each scene is radically different in style and tone, despite still (loosely) adhering to the original film's storyline.

Participants in the project were encouraged to make the material as outlandish as possible while generally adhering to the framework of the original movie, and each scene was directed by a different group of filmmakers. More than 50 participants took part in the project.

The film features contributions from many parody groups and directors, including Cracked, Channel 101, Fatal Farm, Honest Trailers, Nicolas Winding Refn (maybe), and many others.

The film was screened in Los Angeles and New York in January 2014, and was released online one month later. It can be watched online at https://vimeo.com/85903713

As a remake of the original film, many of the tropes on that page still apply. This film also provides examples of: