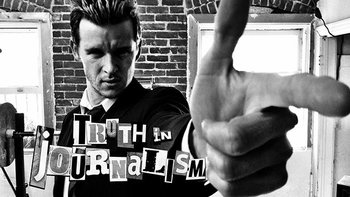 Truth in Journalism is a 2013 short film by director Joe Lynch and producer Adi Shankar, starring Ryan Kwanten as a well-known and rather quirky (some would say troubled) journalist named Eddie. Eddie is the subject of an amateur documentary by a group of young filmmakers who want to get his perspective on his controversial career. So begins a series of interviews that become more twisted and strange with each day. And as the film crew quickly discover, Eddie's not the type to take constructive criticism...

The film can be watched in its entirety on Vimeo

Truth in Journalism provides examples of: