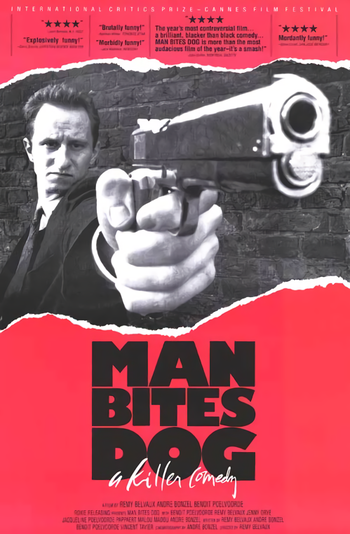 "If you kill a whale, you get Greenpeace and Jacques Cousteau on your back. But wipe out sardines and you get a canning subsidy."
Advertisement:

A Belgian 1992 Black Comedy Mockumentary directed by and starring Benoît Poelvoorde, Rémy Belvaux and André Bonzel, following a Serial Killer as he goes about his business. The original title is C'est arrivé près de chez vous, which literally translates to "It Happened Near Your Home".

The film had a shoe-string budget and therefore made as cheaply as possible. Everything was filmed in black-and-white and the three directors are also the three main actors. Supporting actors are friends and family members, which only adds to the realism. Despite its financial limitations, it became a powerful, sometimes funny, often disturbing satire on the news media's obsession with real-life violence. The film also became a Cult Classic outside Belgium.