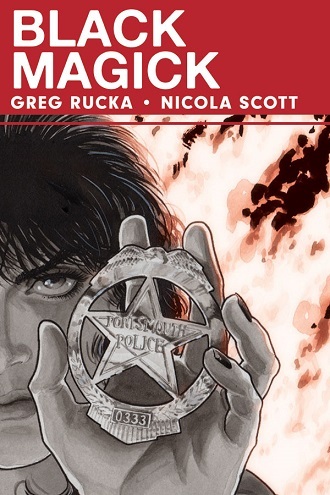 So mote it be
Advertisement:

Black Magick is a creator-owned Image Comics series written by Greg Rucka (Lazarus, Queen and Country) and illustrated by Nicola Scott (Birds of Prey, Teen Titans). The first issue was published in October 2015, and Rucka has said there are roughly 30 issues planned out.

Rowan Black is a police detective in Portsmouth, a town in the Pacific Northwest of the United States. She's also a practicing Wiccan, though she keeps this fact private from her fellow officers. While taking part in her coven's Mabon ceremony, the ritual is interrupted by her Captain calling her in to deal with a hostage situation: A man has taken several people captive and is threatening to kill them unless he is allowed to speak to Rowan personally, but even after hearing his voice and talking to him, she has no idea who he is. The man agrees to release the hostages if Rowan will meet him face-to-face, but after the civilians leave, he reveals that he knows her "truename", and that he knows she is a witch, then attempts to set her aflame with kerosene and a lighter.

Rowan survives through the use of magic — her Wiccan nature is not just religious, but real — by turning the man's flames upon him instead. Fearing that the persecution of witches is starting again, particularly by an ancient enemy known as "Hammer" (Or "The Hammer"), Rowan and her coven seek to discover who it was that put up the man to kill her, and why.