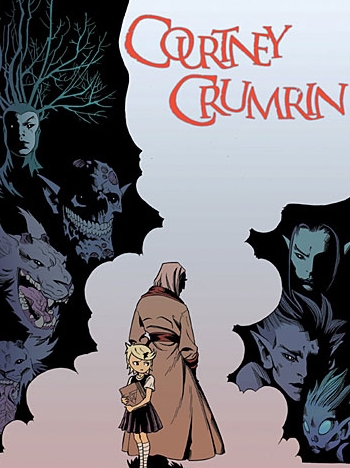 and published by Oni Press.

Courtney Crumrin is an odd middle-school girl who struggles to connect with much of anyone — including her vapid, self-absorbed parents. When her family finds themselves up to their neck in debt, they move in with her reclusive Uncle Aloysius, at his request, in the ominously unsuspecting upper-class town of Hillsborough. Courtney immediately hates the new locale, including the insipid people who inhabit it... Until she finds out that there's more to her "Uncle A" than at first meets the eye. It turns out Aloysius is a powerful warlock, and upon discovering her own potential for wizardry, Courtney begins simultaneously learning about the mystical Underworld of magi, and the tribulations of growing up.

The series is comprised of the following installments:

After a bit of a hiatus, the series returned in 2021 under the name "The Crumrin Chronicles", this time focusing on Courtney helping her newfound brother, Will, navigate the human and magical world.