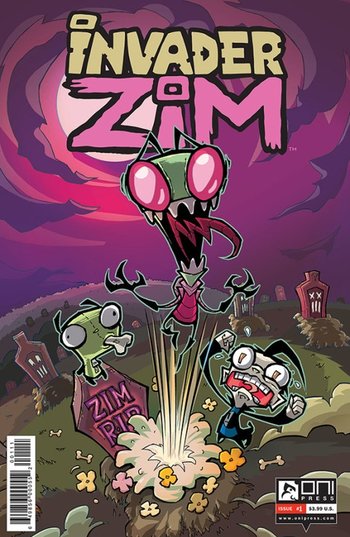 THE RETURNENING!
Dib: As Earth's greatest defender, I'll sit here and watch and wait for as long as it takes to find out what he's up to.
Gaz: I think you hiding in here forever is awesome Dib, but Zim has been gone a long time (...) Zim might never show up again and you'll just be wasting your—oh, wait, nevermind, there he is.
— Issue #1
Advertisement:

By the mid-2010s, Nickelodeon's infamous Black Comedy TV series about an egomaniacal alien's fight for control of a crapsack Earth against a child paranormal scientist had been out of production for over a decade. But despite its short 27-episode run, Invader Zim still boasted a huge cult following that had Nick execs floating around ideas on how to capitalize on it beyond a continued stream of Hot Topic merchandise. While they struggled for a few years, debating with creator Jhonen Vasquez on the terms for another animated Zim project, they did manage to get him onboard with a Sequel in Another Medium.

In February 2015, an Invader Zim comic book revival made in collaboration between Oni Press and Nickelodeon was announced. An Issue #0 in the form of a "TruthShrieker" fanzine was released on May 23, 2015, followed by the first issue of the ongoing monthly series being released on July 8, 2015. The comic is overseen by Vasquez himself, with him also writing on occasion. Other series veterans would also return to lend their talents to the series, with writer Eric Trueheart penning several issues, while artist Aaron Alexovich and colorist Rikki Simons would aid during its early run.

(fittingly called Invader Zim Quarterly), beginning June 17, 2020. The quarterly series would last only four issues (each officially labelled as a one-shot) before being cancelled, with an announcement in April 2021

stating that the series as a whole was being discontinued following a final issue which was released in August of that year.

As for Nickelodeon wanting another animated Invader Zim project, Vasquez did eventually agree to do a television movie. The film, Enter the Florpus, was released on Netflix on August 16, 2019. The movie would go on to adapt the comic's first issue... well, at least the beginning of it, before quickly veering off into its own thing by means of For Want of a Nail.