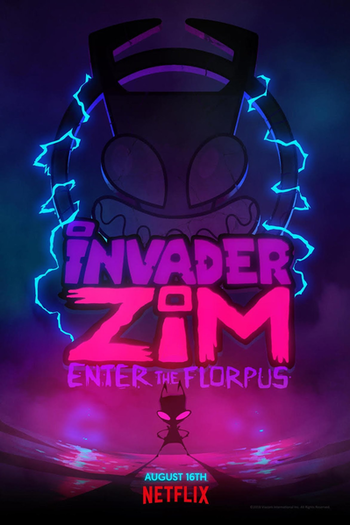 Invading Soon(-ish).
Professor Membrane: As you know, tomorrow is Peace Day. And nobody is as excited for the big celebration as I am.
Audience Member: I am!
Membrane: NOT SCIENTIFICALLY POSSIBLE!

Invader Zim: Enter the Florpus is a dark comedy Science Fiction Nickelodeon television movie based on the animated series Invader Zim. Officially announced in April 2017note C.H. Greenblatt would casually leak its existence five months prior and set to air on Nickelodeon's own channel, the film completed production in January 2019, and was released worldwide on Netflix on August 16, 2019.

Series creator Jhonen Vasquez served as writer and director, with the voice cast reprising their roles. Composer Kevin Manthei also returned to produce the soundtrack, with several artists who worked on the show's comic book continuation (such as Jenny Goldberg) also being involved with the production.

After having disappeared for an undisclosed amount of time, Zim suddenly reappears to begin PHASE TWO of his evil plan to conquer Earth in the name of his Almighty Tallest, who still couldn't care less about the little green alien. With the world once again in danger, and certain that this will finally be the moment he can prove to everyone (or at least his father) the existence of extraterrestrials, his nemesis Dib Membrane sets out to unmask him once and for all.

Professor Membrane barrels through a crowd of people in an instant just to prove a point.

Professor Membrane barrels through a crowd of people in an instant just to prove a point.