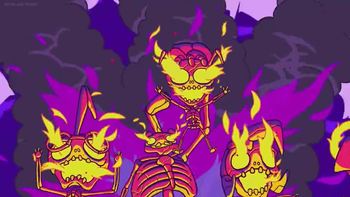 This is what happens when Zim finally wins!
Yeah, Jhonen Vasquez may have lightened up a bit over the years, but it'll still do you some good to remember that this is still Invader Zim and Vasquez is still the guy who thought up Johnny C. No shit there'll be a bit of horror mixed in with all the wackiness:
Advertisement: