Western Animation / The SpongeBob Movie: Sponge on the Run 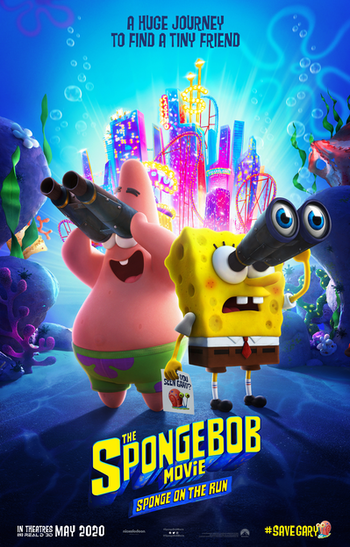 A huge journey to find a tiny friend.
Patrick: This is gonna be like... a buddy movie!
SpongeBob: Oh, I love your sense of irony, Patrick.
[Cue Patrick ironing a sweater]
Patrick: Thank you, haha. I love my sense of ironing, too.
Advertisement:

The SpongeBob Movie: Sponge on the Run is a CGI-animated comedy movie, and the third movie based on the series SpongeBob SquarePants. It is the first movie in the SpongeBob series to be entirely CGI-animated (unlike the series itself and the prior two movies which utilized primarily traditional 2D animation). Following this movie, Nickelodeon launched a CGI spin-off named Kamp Koral where SpongeBob is still the main character but with a younger voice.

SpongeBob's pet snail Gary is "snailnapped" by Poseidon, so he has to journey to Atlantic City with his best friend Patrick in tow to get him back. The movie also tells the story of how SpongeBob and Gary first met.

This movie was originally scheduled to release in the summer of 2020, but as with a lot of film and TV productions, the 2020 COVID-19 Pandemic put a stop to that, and was released to streaming on Paramount+ (formerly named CBS All Access prior to its relaunch) in the US on March 4th, 2021, although it was released exclusively in Canadian theatres very briefly on August 14, 2020. On November 5, 2020, it was made available to watch on Netflix internationally, and is considered a "Netflix Original" film in most regions.

The SpongeBob Movie: Sponge on the Run contains examples of:

SpongeBob: [barges into the Krusty Krab kitchen just as Plankton got the formula] I knew it!
[Plankton gets scared and falls from the grill]
SpongeBob: I knew I left my keys in here. Silly me!