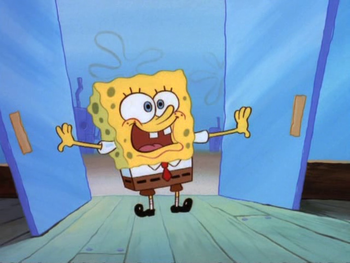 And thus, a legend in cartoon history is born.
Advertisement:

Ah, the sea. So fascinating, so wonderful. Here we see Bikini Bottom, teeming with life. Home of one of my favorite sea creatures, SpongeBob SquarePants. Yes, of course he lives in a pineapple, you silly!
— The French Narrator

SpongeBob SquarePants has set off to fulfill his life's dream: A job at the Krusty Krab. He gets nervous, but with the motivation of his best friend Patrick, he goes in. But their cashier is his bitter neighbor Squidward, who tells the manager Mr. Krabs not to let him in. So Krabs sends SpongeBob out to retrieve a special spatula for him. Just as he leaves though, a cluster of buses full of anchovies arrive, attacking the Krusty Krab for their food, leaving the raw recruit as their only hope for survival. 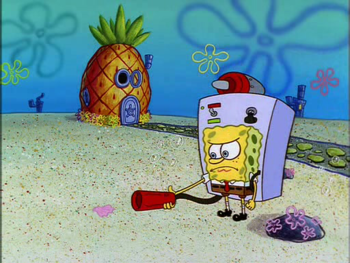 Another day, SpongeBob uses his reef blower to clean his lawn after Squidward kicks a clam onto it. In the end, SpongeBob drains the entire ocean. 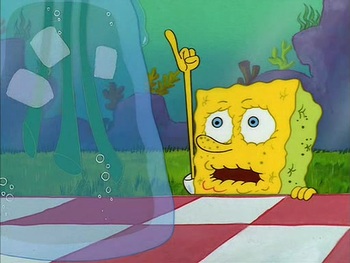 The episode then goes to SpongeBob meeting a "land squirrel" named Sandy Cheeks, who maneuvers underwater with a special suit. She invites him to her underwater dome, where he slowly starts to die of dehydration. Rather than say anything about it, he decides that he doesn't need water. This doesn't end well.

Tea at the Treedome contains examples of: