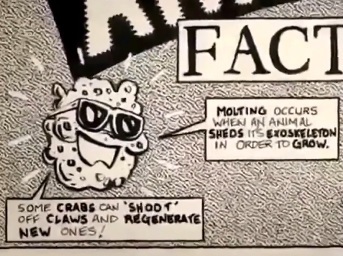 Before SpongeBob SquarePants came to be the sponge we know today, he started out as a prototype in this edutainment comic.

is a comic book drawn by Stephen Hillenburg in the late '80s during his time as a marine biology educator at the Orange County Marine Institute in California. Hosted by Rocky the Shrimp and an early version of SpongeBob known as Bob the Sponge, it teaches about sea life in Southern California, and became the basis of the Nickelodeon Cash Cow Franchise we know today. Although it was never published, several panels from it are available to view online.