"What if, when Alice came back from wonderland...Wonderland came back with her?"
— Jax Epoch And The Quicken Forbidden: Borrowed Magic 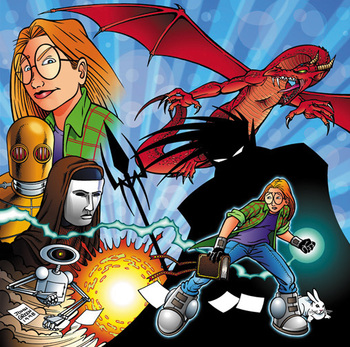 Jax Epoch and the Quicken Forbidden

is a graphic novel published in 1996, written by Dave Roman and illustrated by John Green.

It tells us a tale of a young 16 year old girl name Jax Epoch, who believes in magic and wishes for some magical excitement in her boring life. One day, while she was hanging around at an abandoned office building with her boyfriend Adam and his friends, one of the rabbits escaped from its cage and Jax chases after it to put it back. But then, while she was chasing it, she stumbles onto a portal that sends her to Realmsend, a passageway between other dimenstions. While she explores this mysterious place, she comes across a dimension where there’s only an old cabin surrounded by field of high hay. When she went inside, she found nothing but a spellbook, a pair of magic boots and gloves, and decided to take them with her, leaving someone a note that she will return them in perfect condition. When she came back though, she started to notice a lot of strange things have been happening: she fights against an evil clone, rides a dragon, is recruited by a bunch of DAK scientists that want her to bring back a robot, and is put on trial for illegally crossing dimensions and awaken an indestructible and forbidden monster known as the Quicken.

Tropes that apply Jax Epoch and the Quicken Forbidden: