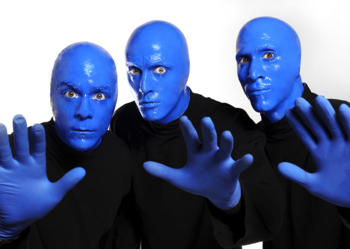 All of the organization's appearances star a trio of performers called Blue Men, who appear to have blue skin and no voice, hair or ears. The original founding Blue Men still perform occasionally, but they have since then taken on administrative roles in the company. Because of the success of Blue Man Group, a parent company called Blue Man Productions was created, which produces all the Blue Man Group shows in the world.