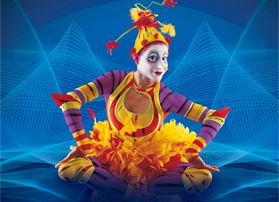 Can imagination be a souvenir? Actually, yes!
— Turn of the Millennium tagline
Advertisement:

Cirque du Soleil's twelfth production, which opened in December 1998, was a landmark for the company in two ways. It was their first non-touring show outside of Las Vegas, and the first to be mounted at a Disney resort: Walt Disney World in Lake Buena Vista, Florida, at a custom-built theater at the Downtown Disney (later Disney Springs) shopping/dining/entertainment district. As well, it was the final Cirque show written and directed by Franco Dragone, who had pulled these duties for most of them up to that point. Amazingly, it premiered less than five months after "O" had arrived on the other side of the country.

Though no Disney elements appear in the show, Dragone and his collaborators took inspiration from that company's knack for re-telling fairy tales and came up with a Cinderella story of their own. Once upon a time, a Cleaning Lady opens the door to an attic filled with strange, colorful personages ("Cirques"), inadvertently causing their world to collide and mingle with the ordinary world of "Urbains" she comes from. Eventually, everyone will be living Happily Ever After.

The name "La Nouba" comes from the French term faire la nouba, which means "to live it up" or "party".

While it was still running at Walt Disney World, this show was filmed and released on DVD in 2004, and is currently the only resident show that can claim this distinction.

La Nouba's final performance at Disney Springs was on December 31, 2017, capping off a nineteen-year run. Disney has confirmed that a new Cirque du Soleil production

called Drawn to Life, with a Disney animation theme, will replace it once the theater has been renovated and updated.