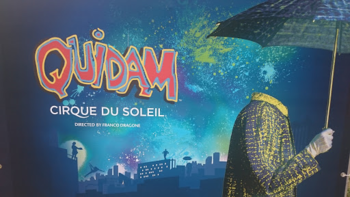 Cirque du Soleil's ninth show opened in 1996 and toured the world for almost twenty years before it closed permanently in 2016. It was born of the company's decision to do a darker, more realistic show (as much as a circus can be) than before. Somehow, they made it work, and it ranks up with shows like Alegría and "O" as one of the company's most acclaimed and beloved productions.

In Latin, "quidam" (pronounced "key-dahm") is a word meaning "nameless, faceless passerby". This is what adolescent girl Zoe feels like. The story begins in her home as she sadly tries to entertain herself, as her father reads the paper and her mother knits, each off in their own little world. Then a stranger arrives...a tall stranger who appears to have no head, and whom only Zoe appears to notice. The stranger — the Quidam — leaves a little blue bowler hat behind as it departs, while two other strangers (bizarre emcee John and the merry, clownish Target) who entered as well stay behind. The hat seems to be magical, and Zoe puts it on. With that, everyone is transported into a sometimes-melancholy Magical Land where Zoe will come to understand that every person in the world is a quidam to someone else, and that love and happiness stem from connecting and reconnecting with others...if only for a little while.

This show was filmed during its Amsterdam engagement in 1999.