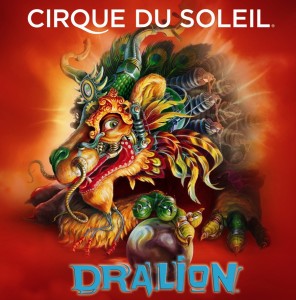 Dralion is Cirque du Soleil's thirteenth production. The original tent tour launched in 1999, and was directed by Guy Caron, who had worked with Cirque in its formative era back in The '80s.

Asian, and especially Chinese, circuses are famous for their skillful, creative acrobatics and acrobats. Many Asian performers and disciplines have appeared in Cirque shows over the years, and this show is specifically a showcase for them. (The title is a portmentau of "dragon", representing the East, and "lion", representing the West.) It is also simpler thematically than most of the company's work of The Nineties, with a mostly-new-to-Cirque creative team behind the scenes, but still lavishly staged.

The concept: A Little Buddha turns over an hourglass and the four elemental forces of the world, each with a god/goddess — fire (Yao), water (Oceane), air (Azala), and earth (Gaya) — gather. This harmonious gathering to maintain the world's balance, guided by L'Ame-Force (the two singers), makes up the show. Three clowns occasionally disrupt the harmony and even spoof what they see, but all in all, all is well.

The show was filmed in 2000 during its San Francisco engagement. It was retired from tent touring in early 2010, but later that year relaunched as an arena tour and in that form ran until early 2015.