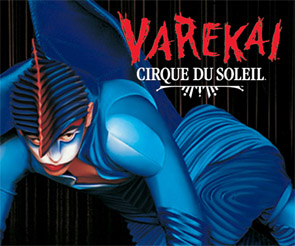 Classical Mythology tells of Icarus (Icare), a young man who escaped with his father Daedalus from island imprisonment via wings of feathers and wax. But Icarus was so entranced and excited by this gift of flight that he flew too close to the Sun, the wax melted away, and he fell... but what if, rather than perishing in the sea as the myth tells it, he landed in an enchanted forest? With his arrival, the story of this show begins.

Icarus comes to amongst the inhabitants of the forest, animals, plants, and people, and realizes that despite all he's already gone through, he yearns to fly again — perhaps without wings. He soon has True Companions supporting his dream, including the grouchy Guide and the goofy Skywatcher. He also gains a sweetheart, the strange yet beautiful green nymph who is his Betrothed. As Act One comes to its climax, she is kidnapped and hauled up into the forest canopy by jealous spider women, and if they are ever to see each other again, they will both have to grow and change to realize what they're truly capable of. Beyond the Guide and the Skywatcher clashing with each other (particularly over the curious lightbulb that tops the former's head), comic relief is provided by two ushers (male and female) who get caught up in the action and try to show off their own talents.

The title means "wherever" in Romany Gypsy.

The most plot-driven of Cirque's touring shows, so much so that a whole photo book was published detailing the story, this show was also the basis for a foray into Reality TV for the company. Fire Within (known in French as Sans Filet ["Without a Net"]) was a documentary series covering the show's development, primarily through telling the stories of several of its performers; it aired on (pre-Network Decay) Bravo in the U.S. The show itself was filmed in 2003 during its Toronto engagement, and became an arena tour in 2013 to make another worldwide touring circuit that wrapped up at the end of 2017.