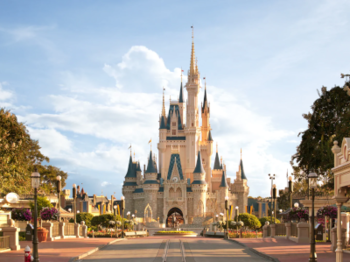 The Most Magical Place on Earth
note Pictured here is Cinderella Castle, the icon of Magic Kingdom—though you probably already knew that—as it appeared before its 2020 repainting.
Walt Disney World is a tribute to the philosophy and life of Walter Elias Disney... and to the talents, the dedication, and the loyalty of the entire Disney organization that made Walt Disney's dream come true. May Walt Disney World bring Joy and Inspiration and New Knowledge to all who come to this happy place ... a Magic Kingdom where the young at heart of all ages can laugh and play and learn — together. Dedicated this 25th day of October, 1971.
—Roy Oliver Disney, Walt Disney World dedication on October 25, 1971,

Disneyland may be the quintessential Disney theme park, but this recreational and entertainment resort complex is the big one, literally and figuratively.

The flagship destination of the massive Disney theme park enterprise, and the world's most popular vacation resort, the Walt Disney World Resort in the Floridian cities of Bay Lake (where the theme parks and one of the water parks reside) and Lake Buena Vista (where Disney Springs and the other water park is, as well being the resort's mailing address) is just a relatively short driving distance from Orlando and Kissimmee in the central part of the state.

The year is 1959. Walt Disney Productions wanted to have a second resort to supplement Disneyland as not many Americans east of the Mississippi River, where most of the country resides, visited the Californian park. Walt Disney himself also wanted to make a project that had enough land for all his ideas; he was not pleased with all the businesses that were built all around Disneyland after it quickly became popular.

Thus began "The Florida Project". After surveying the land near Orlando by air in 1963, seeing the area's efficient networks of roads, the construction of Interstate 4 and Florida's Turnpike, and nearby McCoy Air Force Base (which would eventually become Orlando International Airport), Disney set up several dummy corporations and secretly purchased thousands of acres of land totaling to a size roughly twice the size of Manhattan Island. After the secret got out in October 1965 thanks to the Orlando Sentinel's Emily Bavar

and officially announced it on November 15.

Sadly, Walt himself would not see the realization of Disney World; he died of lung cancer on December 15, 1966. His brother Roy Oliver Disney delayed his retirement to oversee the resort's construction. He got the State of Florida to create the Reedy Creek Improvement District for the resort, which established the two cities of Bay Lake and Reedy Creek (which was later renamed to Lake Buena Vista after the city boundaries were redefined away from the actual creek) and gave the Disney corporation much immunity from county and state land-use laws present and future. The resort opened on October 1, 1971, with the Magic Kingdom theme park, the Contemporary Resort Hotel, the Polynesian Village Resort, and the (actually already opened a few weeks prior) Palm and Magnolia Golf Courses as its first offerings. Roy declared the resort to be "Walt Disney World" to honor his late brother; he later died on December 20 that year.

Today, the resort now encompasses four theme parks, two (formerly three) water parks, many resort hotels, and more. Despite that, Disney hasn't even used half of their massive amount of land — they could build exact duplicates of everything they have and still have space left for more.

open/close all folders
Theme parks (and their lands) 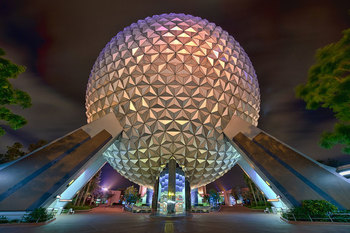 Spaceship Earth, the icon of Epcot. 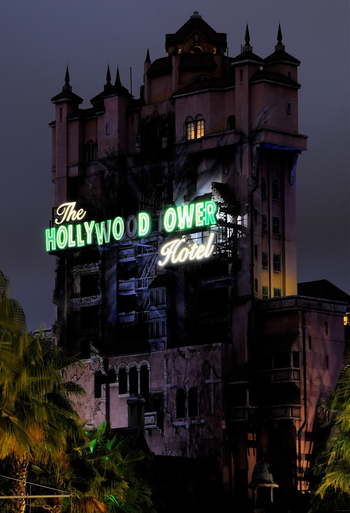 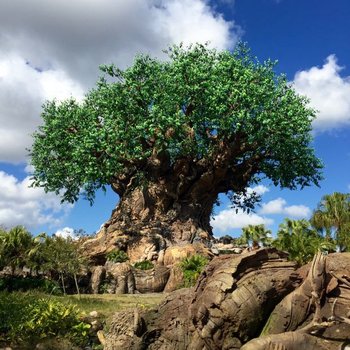 The Tree of Life, the icon of Disney's Animal Kingdom.
Water parks
Walt Disney World is also unique in that it's Disney's only resort to have water parks. 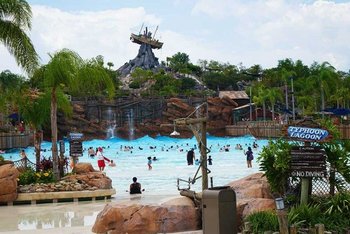 The iconic Surf Pool of Disney's Typhoon Lagoon, with Mount Mayday and "Miss Tilly" in the background 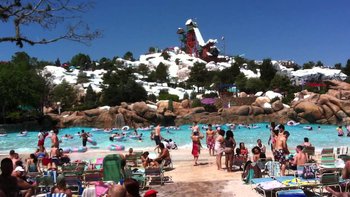 The Wave Pool at Disney's Blizzard Beach, with Mount Gushmore and the iconic "ski ramp" of Summit Plummet in the background
Other attractions
Resort areas and their resort hotels (and other lodgings)
Disney has a lot of hotels, each with their own amenities in various price ranges ("value", "moderate", and "deluxe", as well as Disney Vacation Club resorts and deluxe villas), located in different "resort areas" named after their main attractions (most of the theme parks, Disney Springs, and the ESPN Sports Complex). Since there are twenty-seven resorts in the resort complex, we'll try to keep their descriptions as brief as possible, mainly by focusing more on their themes.
Reporter: Trope-tan, you've just read through the entire page! What are you going to do next?
Trope-tan: I'm going to go to bed!