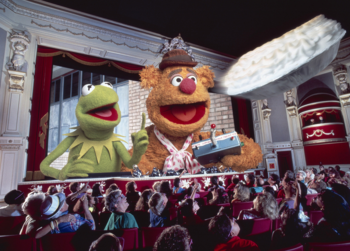 A New Dimension In Entertainment!
Advertisement:

Before he died, Jim Henson directed one last project with The Muppets for the group he was working on selling them to: Disney. The show, Muppet*Vision 3D, which was written for the Disney Theme Parks, combines 3D images, audio animatronics, and live actors for one of the parks' most interactive movies. It premiered in 1991 at the Disney-MGM Studios theme park (now Disney's Hollywood Studios) in Walt Disney World. It also became an opening day attraction for the Disney California Adventure park at Disneyland in 2001.

The film starts in the queue, with an informative (and hilarious) pre-show, involving Sam the Eagle explaining the safety proceedings before ushering the people in. The actual show involves the Muppets having just perfected Muppet*Vision and attempting to demonstrate it through various musical numbers, with varying success.

While the Florida version of the attraction has been playing uninterrupted since 1991, the California version became a seasonal attraction from 2010 to 2014. In that time the theater became host to three film previews, for TRON: Legacy in 2010, Frankenweenie in 2012 and Oz the Great and Powerful in 2013. The show had its last performance in 2014 when it was replaced with For the First Time in Forever: A Frozen Sing-Along Celebration, which played in the theater until the opening of Frozen: Live at the Hyperion in 2016. The Muppet Theater was then renamed the Sunset Showcase Theater, and showed only movie previews from 2016-2018. In 2019, the theater became home to Mickey's PhilharMagic, although movie previews are still rotated in from time to time.

and the imdb entry.

Statler: So, with this 3D thing, it's like they're coming right out of the screen.
Waldorf: Why would you want that? It's bad enough when they stay behind it!
Both: Doh-ho-ho-ho-ho!