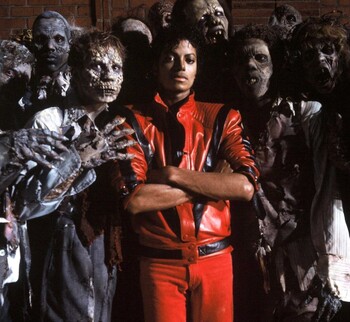 "I'm not like other guys."
For no mere mortal can resist
The evil of... the thriller.
— Spoken part by Vincent Price
Advertisement:

"Michael Jackson's Thriller" is a longform music video directed by John Landis for the Title Track of Michael Jackson's 1982 album Thriller. One of the earliest music videos to blur the line between Hollywood cinema and typical pop music clips, it premiered on MTV on December 2, 1983.

The video came about simply as a way to boost the Thriller album, which was nearly a year out from its original release in November 1982 and slipping down the charts, back up to number one. And it worked — though not necessarily because of the song itself, which hadn't actually been released as a single until well after the video premiered. What set this song apart — and planted it permanently in the global lexicon of planet Earth — was its music video.

The video had a full runtime of 13 minutes and 42 seconds. The Framing Device was a young man (played by Michael) taking his girlfriend (played by Ola Ray) to see a monster movie — the couple in that film were also played by Jackson and Ray. While walking home from the film, they are suddenly surrounded by zombies.

Then Michael becomes a zombie.

And all the zombies start dancing.

This music video helped seal the Thriller album's place in history, and helped it become the biggest-selling album of all time. But while today it is pretty much universally loved, it was not without controversy at the time; both Landis and Ray would end up suing Michael in separate disputes over royalties. Both were settled; Ray's dispute was settled after Michael's death, having been brought only two months prior.

Multiple sources have hailed Michael Jackson's Thriller as the turning point for the music video medium, turning it into, as director Brian Grant has said, a "proper industry." Nina Blackwood, MTV VJ and executive, noted how music videos began to become more sophisticated––for better or for worse.

While the video did not win the overall Video of the Year award at the inaugural MTV Video Music Awards, it did take home three Moonmen, including the Viewer's Choice award, and Best Choreography. A making-of documentary would win the Grammy for Best Video Album at the 27th Grammy Awards.

Not long after Jackson's death in 2009, fans all over the world paid their respects by re-enacting the dance sequences from the video. At the end of that year, Thriller was added to the National Film Registry. It is currently the only music video to be preserved by the United States Library of Congress.

It's close to midnight, and something evil's troping in the dark: