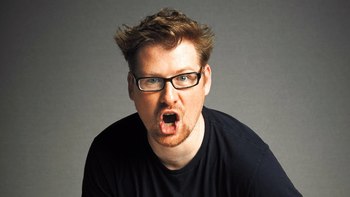 Mark Justin Roiland (born February 21, 1980) is an American voice actor, animator, writer, producer, and director. He is best known as the co-creator and former executive producer of the [adult swim] animated series Rick and Morty, in which he voiced both of the show's eponymous characters in the first six seasons. Before he created the show, he created multiple animated shorts for Channel 101 and was the voice of Oscar on Disney XD's Fish Hooks. He also voiced Earl of Lemongrab on Adventure Time, Chris on Out There, Blendin Blandin on Gravity Falls, Doop Doop on Star vs. the Forces of Evil, Clumpy in Krampus, Doug Cheston on Invincible, and the Ice Cube Head on Community's series finale.

He also created (and, until 2023, starred in) Solar Opposites for Hulu and has a video game called Trover Saves the Universe, developed by Squanch Games, a video game development studio he co-founded. As of 2023, he has also written for the animated anthology series The Boys: Diabolical and created the TV special The Paloni Show!Halloween Special! and the video game High on Life, another Squanch Games production, as well as executive produced the animated series Koala Man.

In January 2023, Roiland was charged with two counts of domestic abuse stemming from a 2020 incident with an unnamed woman whom he was dating. He has so far pleaded not guilty to the charges and is expected to face trial beginning April 27. This incident caused Adult Swim to dismiss Roiland, with Rick and Morty planning to recast his roles starting with season 7. Hulu later did the same, announcing that Solar Opposites and Koala Man will be produced without him going forward. Also, Squanch Games announced that he had resigned from the studio shortly after the Adult Swim announcement.