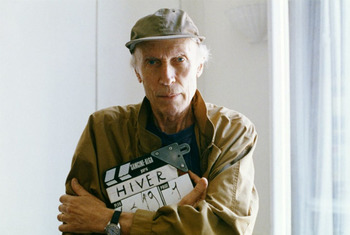 "I do not say with words. I do not say it with images either...I do not say it, I show. I show people who move and speak. That is all I know how to do, but that is my true subject."
Advertisement:

Rohmer originally worked as a literature teacher before moving to Paris to work as a journalist. While there, he developed a passion for film and eventually began writing criticism for the film journal Cahiers du Cinema, working with Jean-Luc Godard, François Truffaut, Claude Chabrol, and Jacques Rivette. Like them he would eventually go into filmmaking. However, Rohmer took longer than his friends to establish himself, not breaking out until My Night at Maud's in 1969.

Rohmer is somewhat atypical compared to his colleagues for several reasons. He was about a decade older, a conservative Catholic, and his films (with a few exceptions such as Perceval le Gallois) were much more classical in style.

His low-budget, low-key, talky style has been quietly influential on independent film for decades. Individual filmmakers as varied as Woody Allen and Richard Linklater have adopted many of his techniques, and movements like Dogme '95 and Mumblecore take numerous cues from his work (Greta Gerwig specifically cited him as an influence on Lady Bird).

Believe it or not, he also made a contribution to the career of Chris Rock. I Think I Love My Wife was an Americanized remake of Rohmer's 1972 L'Amour l'après-midi (Chloe in the Afternoon, the Sixth Moral Tale).

Tropes associated with Éric Rohmer include: