Film / The Bakery Girl of Monceau 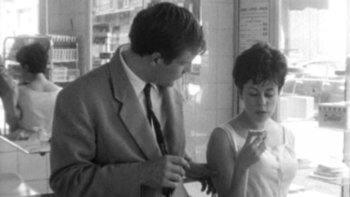 The Bakery Girl of Monceau (French: La boulangère de Monceau) is a 1962 short film written and directed by Éric Rohmer, offically the first of his Six Moral Tales.

A law student (Barbet Schroeder)note who produced this film and the subsequent five Moral Tales, and later became a prominent director in both France and America, with such films as Barfly and Reversal of Fortune to his credit becomes infatuated with the beautiful, blonde Sylvie (Michèle Girardon), who he passes on the sidewalk every day. One day they bump into each other and finally talk. Since the ice is now broken he decides to ask her out on a date the next time he sees her. But when he goes to look for her in the neighborhood where she lives, she's nowhere to be found. To pass the time he goes to a small bakery where the shy brunette Jacqueline (Claudine Soubrier) works. Stopping by the shop each day after a fruitless search for Sylvie, he's convinced that Jacqueline has fallen in love with him and finally asks her out. But on his way to pick up Jacqueline, he meets Sylvie again.

Rejected by film festivals and theaters, it didn't get a formal theatrical release until 1974, long after Rohmer had established himself as a filmmaker.